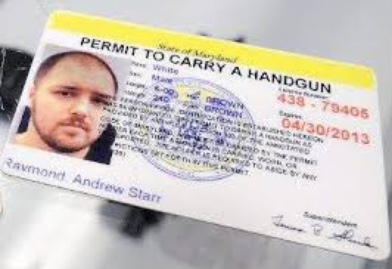 An example of a Handgun Permit (Circa 2013) issued by the Maryland State Police.

Without a permit, Lawful Transport in Maryland is unloaded and restricted. Lawful carry in Maryland is only permitted under certain circumstances. Lorem Ipsum is simply dummy text of the printing and typesetting industry. Lorem Ipsum has been the industry's standard dummy text ever since the 1500s, when an unknown printer took a galley of type and scrambled it to make a type specimen book. It has survived not only five centuries, but also the leap into electronic typesetting, remaining essentially unchanged. It was popularised in the 1960s with the release of Letraset sheets containing Lorem Ipsum passages, and more recently with desktop publishing software like Aldus PageMaker including versions of Lorem Ipsum.

The Maryland General Assembly requires that you have a Good & Substantial Reason to carry a handgun.

For example, Scherr expressly rejected a number of arguments based on the Second Amendment, including the argument that the meaning of "good and substantial" must be construed by reference to the Second Amendment, solely on the ground that "the Second Amendment ... is not applicable to the States.'" See Scherr, 163 Md.App. at 443. That holding was overruled by McDonald, which squarely held that the Second Amendment "is fundamental to our Nation's scheme of ordered liberty and system of justice" and thus binding on the States. Moreover, both Scherr and McDonald merely affirmed an administrative interpretation given "good and substantial" by the Maryland State Police and the Maryland Handgun Permit Review Board. Yet, in Scherr, the interpretation at issue was literally "made up" by the Trooper reviewing the application. See Scherr, 163 Md.App. at 428. A "made up" interpretation is not entitled to weight.

The MSP has both the power and responsibility to interpret the meaning of "good and substantial" and it is not, in any way, "bound" by its prior decisions or practices with respect to the meaning of "good and substantial." An agency is free to change its interpretation of a statute at any time. See Perez v. Mortgage Bankers Ass'n, 135 S.Ct. 1199 (2015); Harvey v. Marshall, 158 Md.App. 355 (2004).

As set forth above, Heller and McDonald provide more than sufficient reason for the MSP to revisit its approach to the meaning of "good and substantial." The MSP should use the standard set forth by the Fourth Circuit in Woollard v. Gallagher, 712 F.3d 865 (4th Cir. 2013), where the court sustained the constitutionality of the “good and substantial reason” requirement only upon the finding that “the good-and-substantial-reason requirement ensures that those persons in palpable need of self-protection can arm themselves in public places where Maryland's various permit exceptions do not apply.” (712 F.3d at 880). The “palpable need” test is not a rigorous or difficult standard. Rather, it merely means that the applicant’s need is perceptible, perceivable, visible, noticeable, plausible, discernible, detectable, observable, or tangible; terms that are all synonyms for “palpable.”

Applications are available from the Maryland State Police website.

In general a permit is valid for each handgun legally in the possession of the person to whom the permit is issued. The Secretary may limit the geographic area, circumstances, or times of the day, week, month, or year in which a permit is effective.[3]

Carrying Outside of Restrictions

​Restriction on the wear, carry and transport of handguns and firearms in certain places appear throughout Maryland law and regulations. Below are statutes and regulations detailing the handgun and firearm restrictions. This list should not be considered all-inclusive.

A person who violates this section is guilty of a misdemeanor and on conviction is subject to imprisonment not exceeding 1 year or a fine not exceeding $ 1,000 or both. [4]

There is no duty to inform in Maryland, but the permit must be carried when in possession of a handgun.[5]

Lawful Use for Self Defense

Original Handgun Permits are issued for at least 2 years and expire at the end of the last day of the applicant's birth month.

Renewal permits are issued for a term of 3 years and expire at the end of the last day of the applicant's birth month.

The Maryland State Police recommend that renewal applications be submitted 90 days, but not more than 90 days prior to expiration.

Note: It is always best to consult with each individual state's regulatory authority in advance.

All States* (Armored car drivers who possesses a valid permits from other states, who are on duty in Maryland).[7]